The Chief Executive Member of N.C.Hills Autonomous Council Debolel Gorlosa, laid the foundation stone for construction of the office of Keshav Smarak Nyas at Natun Lampu village, Maibang in Dima Hasao district, On the auspicious occasion of Vijaya Dashami. 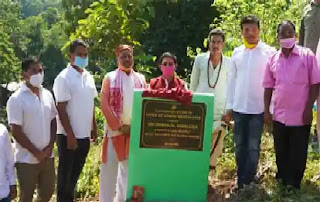 Earlier the CEM  inaugurated Hanging Bridge over Langting River at Pampu Ghat near Langting on October 19. Speaking on the occasion, the CEM said that the earlier bridge was damaged and taken away by flood last year. The villages of the nearby villages have been facing difficul to cross the river since then. Now, with the completion of the bridge, the villagers of the river side will bring easy communication, he said.

Gorlosa also thanked the Chief Minister Sarbananda Sonowal and Finance Minister Himanta Biswa Sarma for extending help for the develooment of Dima Hasao. He also said “develooment work in Langting is going on, if this goes well Langting will become different within five years. Seeing this development under BJP government, many persons from AGP and Congress party have already joined BJP recently”.

Later, on the same day, the CEM  inaugurated the Commercial Complex at Maibang Bazar followed by Opening of High Mast Lighting System at Maibang.